Home » Beauty and Fashion » ‘A bit of theatre’: Behind the scenes at fashion week’s biggest show

‘A bit of theatre’: Behind the scenes at fashion week’s biggest show

For a designer set to stage the largest show of his career, Toni Maticevski appears incredibly relaxed amid the controlled chaos backstage at the Virgin Australia Melbourne Fashion Festival (VAMFF).

On Thursday night, Maticevski presented 60 looks in the Grand Showcase parade – the only solo show on the main festival schedule. To illustrate the size of the undertaking, at Chanel's recent show in Paris, the brand presented 72 looks; Louis Vuitton just 47. 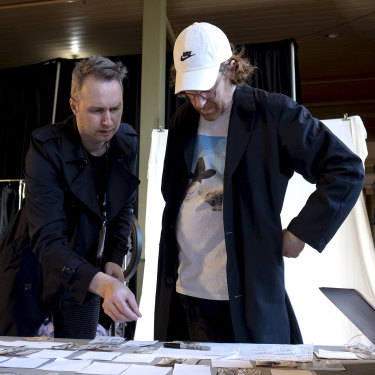 Toni Maticevski (left) and stylist Jolyon Mason look over the running order for the show.Credit:Luis Ascui

"We're combining about three seasons," Maticevski tells The Age and The Sydney Morning Herald in between model fittings a few days before the show.

VAMFF is a see-now-buy-now event, so it was important that at least some of what Maticevski showed on the runway was available to buy. But as the Grand Showcase designer, he was also afforded a degree of latitude, showing pieces from his upcoming two collections.

A selection of belts at the final fittings before the show.Credit:Luis Ascui

"Because it's an audience who's buying a ticket and wants to be there, it's got a different vibe to an audience you totally invite," he says. "I'm treating it as … dinner and a show. You're there to see a bit of a spectacle, a bit of theatre and drama."

Maticevski was last on the VAMFF runway in a solo capacity in 2012, when he staged a retrospective. This time, the vision was more forward-looking, he said when he was bestowed with the festival's highest honour (the sponsored show costs about $250,000 to produce).

Stylist Jolyon Mason locks in a look with a photograph of the model.Credit:Luis Ascui

"Like everything I do, it's got a bit of a darker undercurrent of 'tainted beauty'," he says. "For me, it's about an experience, so people come in and leave with a feeling of something, whether it's positive or deep."

Maticevski says in putting a show or a collection together, there's the natural fusion of the personal with what's going on in the world around him. And right now, that world has a "definite shadowing on everyone's horizon of unease and a big question mark".

"By the same token, you have to stay optimistic and look for the light," he says.

Having been in Paris last month where numbers at fashion week were significantly down, Maticevski said a consequence of coronavirus was a "slowing down" of fashion's frenetic cycle.

"It's a little bit out of control in terms of the amount of output we, as designers, do, and also the level of travel and time away from office and family," he said. "It really cemented the fact that we are doing too much, too soon for even the consumer to keep up and the creative to stay strong." 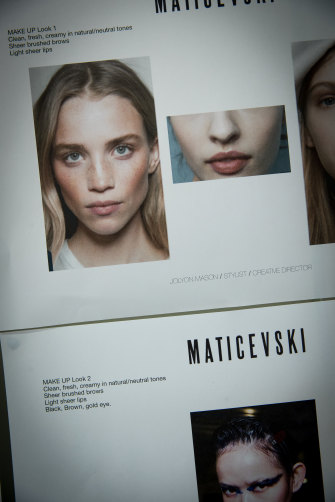 The styling team's brief for the hair and make-up teams.Credit:Simon Schluter

Once it hits the runway, the Grand Showcase will run for about 30 minutes. But a team of more than 50 stylists, make-up artists, technical staff and models has been working for months to make it happen.

Maticevski is at the VAMFF offices in the city for hair and make-up trials with the team from Priceline, headed up by make-up director Sarah Laidlaw. 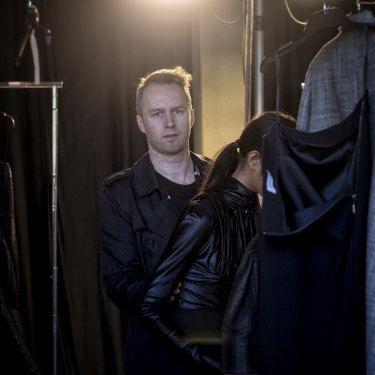 Stylist Jolyon Mason and Maticevski have briefed the team on how they want the models to look – "clean, fresh, creamy in neutral tones; sheer, brushed brows; light, sheer lips" – so this is their chance to see how Laidlaw has interpreted their vibe.

While the first look is very "no make-up make-up", the second is more dramatic, with a black/brown/gold eye for added punch.

For the show's casting director Jennifer McLennan, working with Maticevski and stylist Jolyon Mason is a dream assignment.

"Jolyon is well known for finding new and untapped talent," she says. "He’s really good. A lot of stylists want people to prove their time before they book them but he’s really confident." 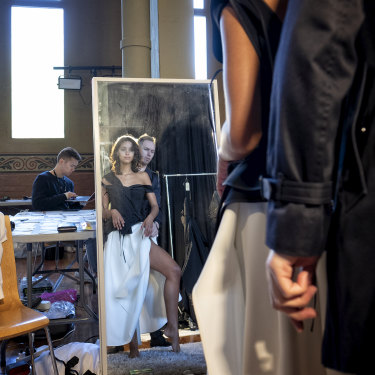 Toni Maticevski adjusts a dress during a fitting for his show.Credit:Luis Ascui

So what does it take to walk in the Grand Showcase, specifically for Maticevski? In a word, says McLennan: confidence.

"The [model's] stature and being able to hold a gown [is key]," she says. So too is a high degree of resilience and being easy to work with.

"Fashion week is hard and long for everyone and it’s not for everyone," McLennan says. "The faces we keep booking, as well as being amazing and strong walkers, it’s more to do with attitude and work [ethic]."

While there no major celebrities walking – "I'm not a big star model kind of brand," Maticevski says – there are four male models in the show. "Seeing how men are dressing, it's more refined and beautiful … it's a nice way to look at how both men and women can feel beautiful … We've done it so they blend in." 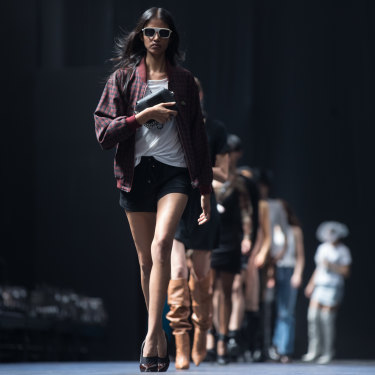 Models practise walking on the runway ahead of the Grand Showcase at VAMFF.Credit:Simon Schluter

It's quite an unglamorous scene backstage at the Royal Exhibition Building, where models are arriving at 15-minute intervals for their fittings for the show. Mason has worked with Maticevski to execute the vision for the runway but it's only once the models are in their looks, including accessories, that the pair can see whether the reality measures up. 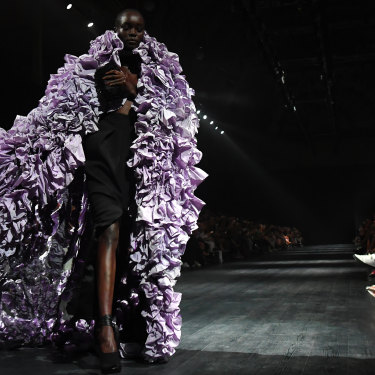 A model in a creation by Toni Maticevski in the Grand Showcase at VAMFF on Thursday.Credit:AAP

Each of the models tries on her look, does a walk, and has her photo taken to ensure the final running order flows. The next time the models step into the dresses will be on the day of the show.

After the other shows have finished for the night and the crowds have long departed the VAMFF venue, Geraldine Frater-Wyeth begins her third or fourth shift for the day – she can't quite remember – doing lighting rehearsals for the Grand Showcase, until about midnight.

"It’s quite different [to previous years] because it's Toni, and he’s extremely creative and talented, so there becomes another layer of creative execution he wants. He’s very detailed and particular," she says, adding that she means it in a "good way".

Like any major event, there are bound to be small things that don't go 100 per cent to plan. But Frater-Wyeth and her team, which oversees more than 20 shows through the week, have become experts at ensuring the audience is none the wiser.

"We’ve planned for everything, [including] worse case scenarios, but there is always something. We just fix problems," she says.