As Pride month comes to a close, it’s important to look ahead to the future of queer film. As long as there are obstacles to funding, production, and distribution for queer films, shorts remain the easiest way for filmmakers to get noticed and get a foot in the door of the industry. That’s doubly and sometimes triply important when you’re a marginalized voice, especially if your work deals openly with themes of queerness, sexuality, race, and/or gender.

While the U.S. has fewer avenues for short films to gain attention than say Europe or Asia, there will always be cinephiles who enjoy the unique pleasures of a well-made short. The best short films don’t use the form as a mere stepping stone to a feature, but as a unique and valuable medium unto itself.

Recognizing that barriers to entry remain higher for all marginalized filmmakers of all stripes, it’s vitally important to highlight up and coming queer filmmakers at the shorts level. You never know which of these filmmakers could be the next Gregg Araki or Desiree Akhavan. In the spirit of finding fresh talent so you can say you knew them one, here are six provocative LGBTQ shorts from queer filmmakers.

Writer, activist, and filmmaker Tourmaline is best known for her electrifying short “Happy Birthday, Marsha!”, which starred “Tangerine” breakout Mya Taylor in a luminous vision of a day in the life of transgender activist Marsha P. Johnson’s moments before igniting the Stonewall uprising. Now, her work is receiving even more prestigious acclaim as her newest film has been added to the MoMA film collection, as part of the institution’s recent efforts to broaden its roster to include more marginalized creative voices. “Salacia” even caught the attention of Keanu Reeves, who signed on as executive producer.

“Salacia” imagines the life of Mary Jones, a trans sex worker who lived in Seneca Village, a 19th century Manhattan community that was one of the only places in the country Black people could own property and vote. It was demolished in 1855 to make way for Central Park. Like much of her work, “Salacia” is informed by Tourmaline’s exhaustive historical and archival research. In her introduction, Tourmaline calls the film “a culmination of many, many people’s freedom dreams.” “Salacia” is available to watch for free online through MoMA until July 9.

“Lavender” is the second narrative short from gay filmmaker Matthew Puccini, who wrote and directed the film. His first film, “The Mess He Made,” starred Max Jenkins (“High Maintenance”) as a man waiting for the results of an HIV test. “Lavender” is just as plaintive in tone, though its themes are slightly lighter. The film centers around a young man (Michael Hsu Rosen) in a relationship with a slightly older couple (Michael Urie and Ken Barnett). “Lavender” opens with the trio sitting at the piano and singing an Irving Berlin tune, and eventually pivots to a hot and heavy group sex scene.

Puccini was inspired by a similar experience he had, though his was a less serious entanglement than the one portrayed in the film. Few filmmakers have truly interrogated what polyamory looks like in real life without resorting to cheap thrills and even cheaper jokes, which is only part of what makes “Lavender” such a revelation. Puccini will be releasing his third short film, “Dirty,” online sometime this summer, so keep an eye out.

Tightly focused and exquisitely rendered, “Lockdown” is an almost painfully accurate portrayal of angsty middle school yearning. The film focuses on fourteen-year-old girl whose feelings for her best friend lead her to act out in the most unexpected of ways. From a tense volleyball scrimmage to the unbearable unease of a crush avoiding eye contact, “Lockdown” is brimming with charged moments that build to an emotional wallop of a film. Still, despite a somewhat heavy topic, “Lockdown” manages to keep a light heart in the right place, reveling in the recklessness of adolescent longing, and embracing sexual exploration through a fully autonomous main character.

Delicately threaded with the tender nervousness of emotional vulnerability, “See You Soon” is a passionate queer romance with surprisingly ripe parallels to navigating connection in quarantine. A long distance romance that has blossomed entirely over technology is suddenly put to the test when the would-be lovers meet for the first time in New York City. As the dashing paramours negotiate physical awkwardness, new sexual roles, and the crushing and wonderful weight of surging *feelings*, the camera follows them with a warm and intimate familiarity. Whatever is missing from the heavy silences is all right there in the frame. 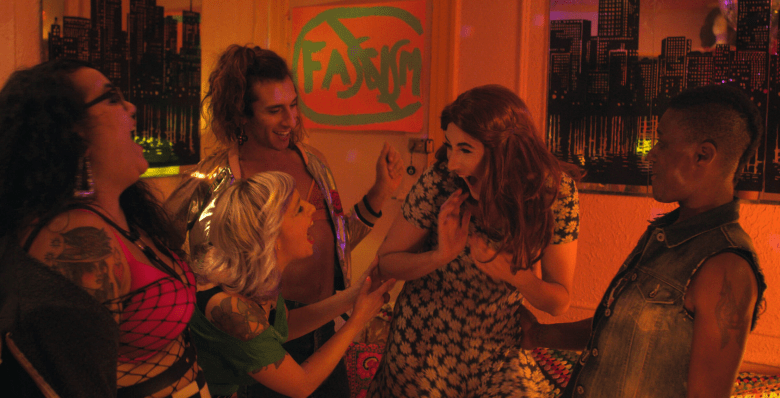 The debut film from performance artist and activist Heather María Ács, “Flu$h” is a hilarious peek behind the blindfold of the queer sex worker community. Ács stars as Roxie, a queer femme caught juggling the sexual needs of her older male client and her hot new date. As her gaggle of friends of all gender presentations stop by to help her wrangle the idiosyncratic fantasies of her clueless regular, Roxie must keep everyone happy while making sure everyone gets paid. Irreverent, silly, and rooted in authenticity, “Flu$h” is a testament to the delightful magic that can result from letting queer filmmakers tell queer stories. Watch “Flu$h” on FemmePower TV.